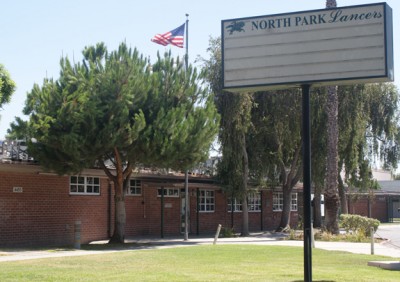 Read on to learn how DataWORKS used Explicit Direct Instruction, English Learner Strategies, and Classroom Coaching to help one school improve their API score more than 300 points in five years.

North Park Middle School in EL Rancho Unified is eyeing an 800 API. They know they can do it, but it didn’t seem that way when they received their first API of 459.

Test results in 1999 ranked North Park in the lowest 10% of schools in California and in the lower third of comparable schools. This was a BIG wake up call to the staff.

DataWORKS is Brought In

In search of technical assistance in standards-based instruction, four members of the Leadership Team attended a DataWORKS half-day workshop. The leadership team realized immediately how DataWORKS could help teachers deliver well-crafted, well-taught lessons; all students could learn more the first time a lesson was taught by building engagement into instruction. A plan was developed, and DataWORKS began training the North Park staff in Explicit Direct Instruction® (EDI)® in 2005.

Included in the trainings were cycles of EDI Lesson Design and EDI Lesson Coaching by DataWORKS. The culture of the school began changing as standards became the focus in the classrooms. Lesson design and delivery were recognized as the keys to success. Checking for Understanding TAPPLE® posters went up in classrooms, student whiteboards were ordered, and staff meetings and professional development targeted raising student achievement using DataWORKS’ strategies.

The 2006 CST scores jumped from 29.5% to 33% proficient/ advanced in language arts and 23.0% to 31.4% proficient/advanced in math. The API increased 23 points and the school’s ranking was 3 out of 10 in California and 7 out of 10 compared to socio-economically similar schools.

Although a change of principal took place in the 2006/07 school year, the North Park staff continued with DataWORKS practices and professional development. New training focused on English Learners, who comprised approximately 33% of the North Park population. DataWORKS also provided an intensive STAR data analysis workshop which pinpointed achievement gaps and allowed a more prescriptive approach to closing those gaps.

Teachers participated in the English Learner and Content Area Literacy training that year. As in the previous year, proficiency rates and API improved on the 2007 CST. North Park students scored 36.6% proficient/advanced in language arts and 39% proficient/advanced in math.  The API gained 27 points and the ranking climbed to 4 in CA and 8 compared to similar schools.

To start the 2007/08 school year, DataWORKS consultants administered Cognitive Strategies training. In addition, DataWORKS conducted a Curriculum Calibration and intensive STAR data analysis Workshop. The results of the Curriculum Calibration showed a much greater percentage of grade level work being done than before. School leadership felt this increase was a direct result of EDI training and the emphasis on grade-level standards being taught everyday.

Again, analysis was done of the test scores.  Of particular interest were the English Learners who had been the focus of 2006/07 training.  Scores for the 2007 CST for English Learners showed a 7.2% proficiency rate increase in language arts and a 15.4% proficiency rate increase in math during the two years the North Park staff had worked with DataWORKS.

This chart displays the API growth at North Park Middle School from 1999-2013. The years shown in green are the years when DataWORKS’ reform was taking place.

DataWORKS strategies had become such an important part of the culture of the school that the principal and Leadership Team developed a classroom observation form which included TAPPLE strategies.

For the 2008/09 school year, North Park only opted to do a half-day EDI refresher training. However, program and curricular decisions were now data-driven. Students were assessed on grade-level work because grade-level standards were being taught in the classrooms. The focus on English Learner strategies continued for all students.

In 2009/10, the former vice-principal and new principal  supported additional training and monitoring. During a one day training, the Leadership Team at North Park learned the process of Instructional Effectiveness Visits (IEV’s). The Leadership Team then trained department representatives who conducted a round of IEV’s with all members of their respective departments.

Data was collected during three rounds of IEV’s and shared with the staff. Areas of need became quite apparent. In addition to IEV training, all teachers received a modified EDI training with special emphasis on the lesson design components of the EDI delivery loop, concept development, and the Rule of Two.

Are you looking to take your professional development to the next level? Would you like to partner with DataWORKS to bring true reform to your site? We can design a customized plan to determine your areas of need and then provide professional development to help you get on track to Common Core success. Contact us at (800) 495-1550 or info@dataworks-ed.com for more information.