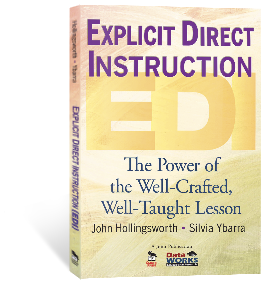 The Well-Crafted, Well-Taught Lesson gets even better!

Explicit Direct Instruction: The Power of the Well-Crafted, Well-Taught Lesson was published in 2009, and since then authors John Hollingsworth and Dr. Silvia Ybarra have forged a path through the Common Core State Standards, visited hundreds more classrooms, and fine-tuned their EDI strategies. Now they are ready to share their new insights with the world!

When they started brainstorming ideas for the second edition of their best-selling book, Hollingsworth and Ybarra came up with an extensive list of new content they were excited to share with their readers. One of the first additions they wrote about was a concept called Rule of Two.

Shortly after the release of the first book, Hollingsworth and Ybarra coined this phrase to describe the “I do, you do” process that is incorporated in every EDI Lesson. Closely-matched pairs of questions or problems set students up for success and avoid asking them to answer variations of a question they have not been taught.

For example, in one-step equations, if the teacher models how to solve:  6x + 1 = 19, students would be asked to solve an equation such as:  5x + 3 = 18. You’ll notice that the variable is on the same side of the equal sign, the values used have the same level of difficulty, and there are no aspects of the problem that should throw students for a loop.

It seems like a simple concept, but you’d be surprised how many textbooks do not follow this simple principle. In many books, when the teacher models 6x + 1 = 19 the students are given 18 + 46y = 64 or 64 – 34 = 3x. That’s a huge leap for students to transfer the skills they just learned to a problem that is set up in a completely different way.

This is just one of the exciting additions that will be included in the second edition of Explicit Direct Instruction: The Power of the Well-Crafted, Well-Taught Lesson when it is published in 2016. Until its release, we will provide you with never-before-seen content, special tidbits, and insights from Hollingsworth and Ybarra through this series of blogs about the EDI Second Edition.

Have you read the first Explicit Direct Instruction book? Are you using EDI strategies in your classroom? What questions would you like to see answered in the second edition? Share your experiences and ideas below.