A Primer on How Students (and All Humans) Learn 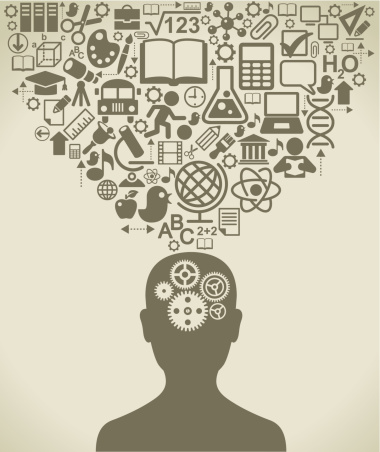 One of the struggles of teaching is presenting often complex material to students in a manner that they can comprehend. Through a basic understanding of how students (and all humans) learn, we, as teachers, can introduce content to our students in a way that will maximize the likelihood that learning will take place. The Information Processing Model provides us with a theory on how humans process information. Today, we will look at learning through the lens of the Information Processing Model, and discuss how to leverage this information to improve student achievement in the classroom. A student is learning to read sheet music for the first time. The student begins his/her lesson in a noisy band hall. Motivated by the student’s desire to play an instrument, the Sensory Memory filters out information unrelated to reading the music (e.g., people walking by, other instruments playing) and focuses attention on information relevant to reading the music (e.g., the lesson in front of him/her, the teacher’s voice).

Once it is decided that information is important enough for attention, it finds its way into Working Memory. The Working Memory provides temporary storage and manipulation of information being processed. So, now that students have decided something is important, they can begin to consciously interact with that information. With Working Memory, the capacity and duration are slightly longer than Sensory Memory, but not by much. Capacity of the Working Memory is considered to be, on average, 7 (plus or minus 2) chunks of information (Note: This capacity is the reason phone numbers and license plates are usually 7 digits long). Important to note here is the word “chunks.” This means the Working Memory is not necessary limited to 7 individual pieces of information. The human brain is very efficient at grouping information to make it easier to handle. Consider, for example, how our brain interacts with phone numbers. We do not think of it as individual digits, but groups, or “chunks,” of digits (area code – three digits – four digits). This is an example of chunking, which allows, in this case, for the consolidation of ten units of information into three “chunks” of information.

Now that we have a basic understanding of the learning process, how can we apply this information to improve student performance in the classroom?

First and foremost, we must gain our students’ attention so the information is not quickly filtered out by their Sensory Memory. In a lesson this can be achieved through a clear, concise Learning Objective. By directly stating what students will do in a lesson, it becomes clear that the information we are about to present is important enough to warrant students’ attention.

Once new content is presented to students, it is vital to have students engaged  in the lesson. Through a variety of cognitive and engagement strategies, it can be ensured that students are processing the information, which is vital for encoding information in Long-Term Memory. Consistently Checking for Understanding with Higher-Order Questions during a lesson makes certain that all students are making use of Elaborative Rehearsal to attach meaning to ideas presented in a lesson, making it easier for students to efficiently encode new information.

Finally, the learning process does not necessarily end after a lesson is finished, even if the majority of information is encoded in Long-Term Memory. Just as students need repetitions while rehearsing new information, they also need repetitions in retrieving previously learned information. This allows students to become more efficient in retrieving the information from their Long-Term Memory in the future. Reviewing learned content periodically provides students with the opportunity to access encoded information, increasing the likelihood they will be able to retrieve it come assessment time.

Have any tips or questions about applying the Information Processing Model in your classroom? Discuss your experiences or concerns in the comment section below.