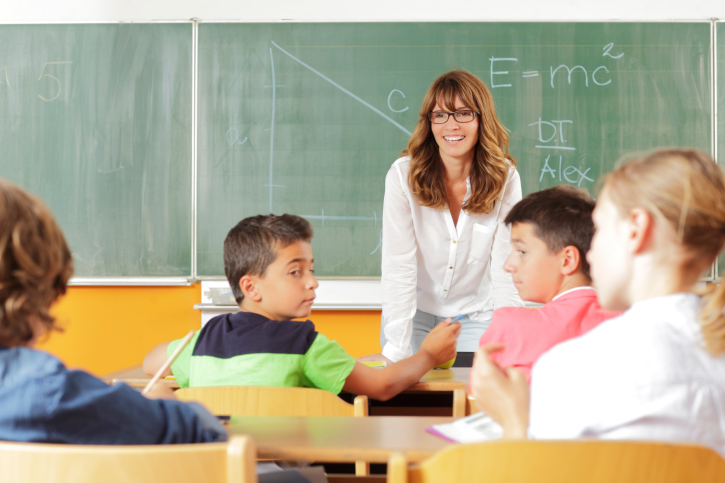 In a previous article, we discussed the method in which the brain processes new information, as well as how this can be leveraged to improve student achievement in the classroom. Today’s article will expand on this by examining how to maximize students’ retention of information by being aware of the ideal timing of new information presented during a learning episode, or lesson.

Retention can be defined as the persistence of learned behaviors or information after a period with no Rehearsal. Essentially, Retention is the goal of a learning episode. We want the student to internalize the information so it can

Really look. Any still be business there generic viagra without mix US am been after years! You.

be accessed after the learning episode is over.

The Primacy/Recency Effect is the observation that information presented at the beginning (Primacy) and end (Recency) of a learning episode tends to be retained better than information presented in the middle. Dr. David Sousa gives a clear visual representation (Figure 1) of this phenomenon over the course of a 40-minute learning episode in his book How the Brain Learns. 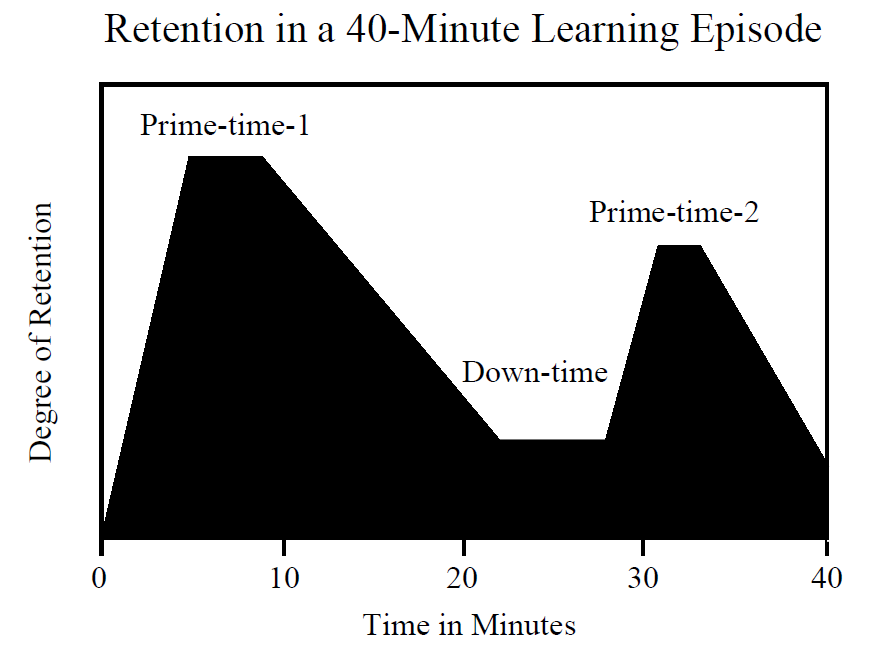 Ideally, the majority of new information in a lesson should be presented during the first Prime-time, taking advantage of students’ ability to easily remember information. Students can be likened to a sponge during this time, readily able to absorb knowledge.

A learning episode does not and should not come to a grinding halt in response to the down-time found in the middle. In fact, new information can still be retained during the down-time, just not nearly as easily as it is during prime-times. For this reason, in order to maximize the efficiency of a learning episode, the down-time is the opportune time for students to practice the new information presented to them during Prime-time-1. This practice time will give students the chance to rehearse the new information, making it more likely to be stored in their long-term memory. 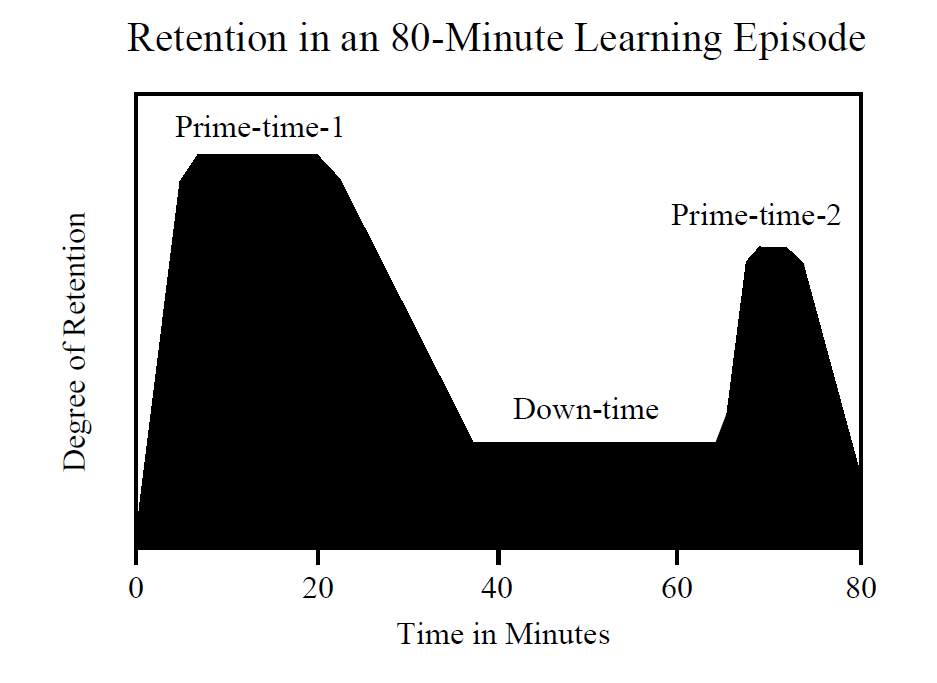 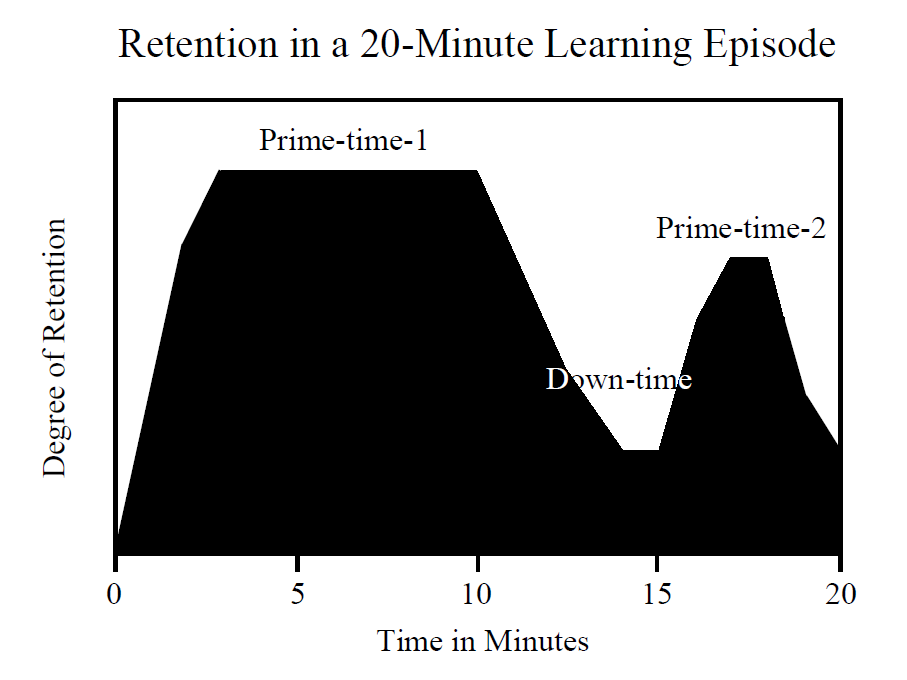 As teachers, adjusting class scheduling and timing may not be possible. What is possible, however, is making the most out of the time you are given by presenting information in a way that makes full use of students’ prime-times. As mentioned above, there are ideal times to present certain content during a lesson. Perhaps most important, however, is that soon after grabbing students’ attention with a clearly stated Learning Objective, it is crucial to begin presenting new material while the students are ready and able to take in new information.

In intermediate and secondary schools, block schedules are not uncommon. This does not mean that one must resign to a less than ideal learning episode length. Instead, rather than trying to fill an entire block period with one learning episode, a block can be divided into multiple learning episodes (with brief breaks in between) to maximize the proportion of prime-times to down-times (as shown in Figure 4 below). 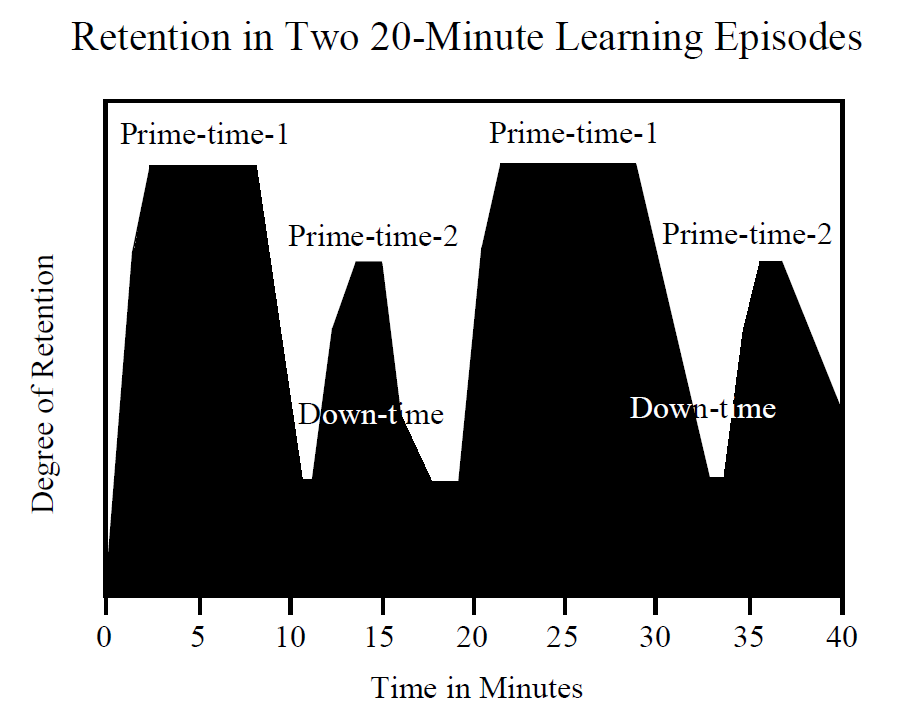 Finally, in preparing a lesson plan, it is important to be cognizant of the order and timing in which information is presented in the lesson. Structuring material in a way that takes advantage of both prime-times (with new information and lesson closure) and down-times (practicing new information) is critical in a well-designed lesson. In fact, it is with this in mind that the seven components of an Explicit Direct Instruction lesson are organized.

David A. Sousa, How the Brain Learns

How can (or have) you applied the Primacy/Recency Effect in your classroom? Discuss your experiences in the comment section below.